And of she goes

And of she goes… A little earlier than planned my sister and I split up. After our Whitsundays tour the plan was to go up to Cairns to spend her last few days up there together. But since I still had a yha voucher I stayed an extra night in Airlie Beach while she already took the night bus to Cairns… and then the plane further to Darwin. Which wasn’t the plan at all. But it was raining in Cairns and the forecast wasn’t promising. So instead of spending her last days in the rain my sister decided that she would rather want to spend them in the sun. Leaving me behind without even saying goodbye (I can’t really blame her since I am not a big fan of the rain either).

But since I believe that everything is good for something I feel like my sister’s early departure somehow has its meaning. And it looks like I am right (again;)). Last week I didn’t have a clue what to do and where to spend the Australian winter after my sister returned to Germany. But now everything just seems to fall into place. Since I wasn’t too keen to go into the rain either I canceled my bus ticket and stopped half way in a cute little town called Townsville. The weather here is currently not completely rainy (just a bit cloudy) and my hostel finally has solid internet (where you don’t have to wait three minutes to open a page). I also saw a promotion for an 8-week fitness challenge, something I wanted to do once in my life anyway and already checked out the local parkour scene. So Townsville definitily looks like a place I could stay a little longer (at least eight weeks now that I joined the fitness challenge).

So here is a tribute to my sister:

1. Our Roadtrip from Melbourne to Perth and then to Sydney:

3. Our flying trapece in Byron Bay:

4. Our trip up the Australian East Coast

And our last picture (which we didn’t know would have been our last): 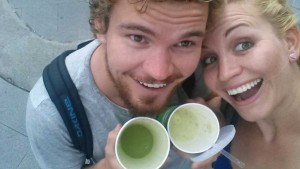 And then came you – Now available on amazon